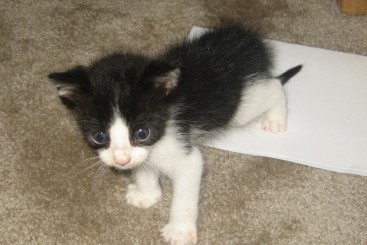 We had finally found a source for dairy heifers and are excited to get some this fall, maybe. But since we’d talked about them they were on our minds.

One of our church members is a ‘cowboy’. He works on a ranch and from time to time gets a good deal on some of the cattle – really good deals. He’s the one that called Laurie and said; “My boss has a calf that was abandoned by its mother and he told me to go feed it and I didn’t want it so I thought of you guys.” Laurie was excited. “And I have some others I’ll bring you.”

Laurie is thinking to herself all day how wonderful it would be to get these free calves – she was excited. She made some special arrangements for the children, and almost bought a back of milk replacer, but just couldn’t get to the feed store. This nice man pulls into the driveway – no trailer. “Must be a pretty small calf” she thought to herself. Then she sees he has two small crates…. CATS not CALFS!!!

Boy was she beside herself… She is sweet and graciously accepted them, 6 kittens abandoned by there mother and a pregnant cat due in about a month. WOW!!

Being responsible we start looking into spay and neutering… EXPENSIVE for 7 cats you’re not sure you need… Plus they may disappear one day.

After much thought we’re giving the cat back… Well, they actually want the cat back, just wanted to leave us with the babies. Besides, when you spay a pregnant cat they take out the babies! We couldn’t do that.

Sadly one kitten died and we gave one away. Down to 4, a manageable number.